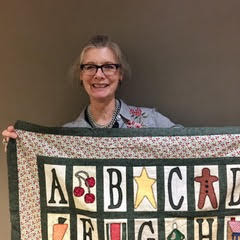 Deadlines, the goals editors set for me as a magazine and newspaper feature writer, and threadlines, the goals I set for myself as a quilter, are very different. The first result from externally imposed requirements for length and content and tone and a challenging creativity-on-demand. Meeting those requirements is fun and fulfilling, but I like threadlines much better. They result from an internal desire to develop whatever fabric project I desire and to start and finish whenever I want and to take it in whatever direction I choose. No one edits my quilts: I undo and redo and change as I want. No one writes headlines/titles for my quilts that don’t quite say what I want them to: I create my own quilt names, to say exactly what I mean them to.


Deadlines and threadlines are also alike, however. They both involve conceptualizing, gathering material (figuratively in the first case and literally in the second), planning, making, revising and finishing. I love all the steps in the process, but the one I like the most is conceptualizing. I realized early on in my quilting experience that I didn’t want just to make fiber art that was just beautiful; I wanted to make fiber art that was beautiful (at least to me!) and that said something meaningful to me or involved word play or referenced something I cared about or had messages tucked into them. I had always been an abecedarian: I collected alphabet samplers, admired all kinds of calligraphic art and enjoyed graffiti. Also, I loved the word/idea of TEXTiles, which is what I started thinking of my quilts as at that point in the mid-’90s. Among the first alphabet quilts I remember seeing, and the one that led to make my first, was on the cover of a magazine, maybe McCalls? It was red and green, as I remember it, and I loved it. 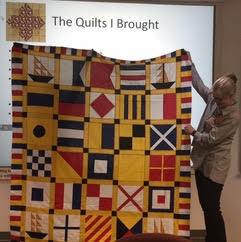 KiloJulietWhiskey: Named after my initials, this signal flag alphabet was fun to draft and make from readily available, copyright free images online.

I began quilting in 1987 when I wrote a feature story for Oklahoma Today magazine about the resurgence of interest in quilting. Titled “Blessed are the Piecemakers,” it focused on OKC’s and OK’s active quilt scene. The city had a guild with more than 200 members, the state had a large state guild and many smaller cities and towns had their own active guilds with shows popping up with increasing regularity. I decided to take a quilting class to understand before I wrote and to end up with a quilt. I had long been an avid crocheter, learned from my mom, Mary Grimm, but I didn’t know then of anyone in my family who had quilted. I found out later that my great grandmother on my father’s side did. I now have a quilt from her and a couple I made from blocks she left when she died. 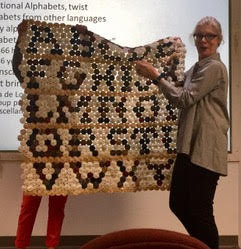 YoYobet: 926 yoyos! I bought the Clover tool for yo-yos in all the sizes. I made a Braille alphabet in all red yo-yos and liked mindlessly making them. Then I found a graph of circles that formed the alphabet and decided I could do those in yo-yos. This is mostly basted. I’ll do the connecting stitches for real this winter. Maybe next.

In 1994-1995, I made my first full-sized alphabet quilt. I collected black and white/grey fabrics that represented something beginning with the letter I used each for. So the letter “I” has ivy fabric and “L “has leaf fabric, etc. Before that, I had made one full-sized sampler block quilt and many others for myself, my son, my family members and as part of an active small group with whom I did group projects repeatedly. My real passion then was hand quilting, and I got really good at that. (News Flash: Use it or lose it. I’m not nearly as good now as I was then. I still love hand quilting, but I don’t do it nearly as much.) 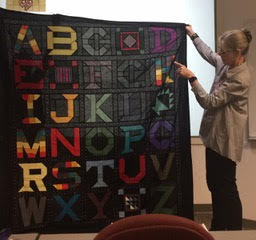 Amishbet: I tend to think of many of my traditional alphabet quilt names with just whatever it is and “bet” attached, in the mode of everything obsessive being “holic.” Hmmmm. Maybe THAT would be a better way to go for me? In any case, neither approach is linguistically sound, but I never let that stop me. This one has the letters that spell AMISH pieced with the leftovers from what I consider my best quilt ever, a Joseph’s Coat I hand quilted.

In the intervening 30 years of quilting and 23 years of strong focus on alphabet quilts or quilts with words on them, I have made more than 50 of varying sizes. Some are finished and gone. Some are finished and still with me. Many are tops and still with me. Hand quilting is not conducive to finishing quickly. My goal now is to become a skilled enough machine quilter to finish more of my works, both the alphabet tops and the many others I have made that aren’t alphabet focused. 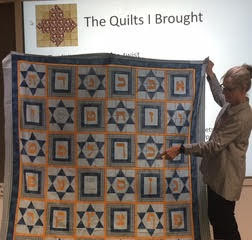 Alefbet: I loved making this Hebrew alphabet within a six-pointed star. Blue and white are traditional colors in Jewish symbolism. I wanted the blue to be dominant, but I decided to use a pale blue rather than a true white. And I went with gold because I have a great backing fabric (I WILL get there eventually!) in blue and gold. My fill-ins are my initials and year of completion in Hebrew/Hebrew calendar year and embroidered symbols of Judaism.

However, the siren call of making more quilts is strong. I’m finishing a T-shirt quilt for my 32-year-old son. And I have many, many more concepts based on my focus as a quilt abecedarian: An APPliqué quilt of App icons from Apple. So many delightful apps! I also have lots of ideas for my other quilt focuses: Dia de Los Muertos quilts and quilts made from vintage blocks my sisters of quilting past have left behind for me to take to the next step in the process. (Many, but not all, of those are signature blocks. I LOVE names on quilts.) Being a member of this ghostly quilt collective has always pleased me. I’m also working away on my wool, blanket-stitched version of the Dear Jane quilt as well as on two relatively new series: Urban landscapes built around, of course, graffiti, and one I am calling I Thought Sew. The first in the latter came about when I had this thought after a frustrating 30 minutes of trying to find something I had misplaced: “I wish I ever did what I always say I will, but I never do,” referencing my constant resolving to put things down in the same place and failing miserably. I liked the wording of my frustration so much I decided to make a wall hanging of it. Then I decided I had other things to say.  Lots of other things.  I Thought Sew will showcase some of those.

So that’s my quilting autobiography. In conclusion, here’s a summary of some of the specific questions Spotlight Members are to answer:

·         When I first started quilting, I wish I had known that machine quilting could be as cool as the modern aesthetic has made it. I thought it was all cheap bedspreads from Sears and bad imitations of hand quilting, and I actively disliked it. Now, I admire it deeply and widely. Maybe I wouldn’t have been so far behind in my tops-to-quilts piles if I had understood machine quilting as I do now: Texture! Negative space!

·         I gravitate toward a colorway of grey, black, red and white, but I try to push myself to try others sometimes. I’m working on a pink and grey quilt now. I have an orange and grey alphabet planned. 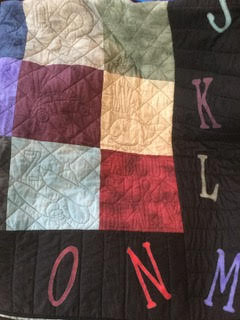 ·         I LOVE naming my quilts. Sometimes I make quilts just to realize a name I’ve thought of: AlphabeTIES is one of those. I’m just finishing a group project in which my quilt is named See Something. Sew Something. I have a super quilt I made from a vintage children’s fabric I named Grammar’s Flower Garden. I have one called Now I’ve Sewn My ABCs. The list goes on.

·         I label all my quilts now. I want my initials, kjw, on the front along with the year. Because alphabet quilts on a grid require four extra blocks, I usually do one with my name and one with the year. I plan to add my name in some way on the front of all the tops I have.

·         My favorite quilting tool is a long pair of tweezers I use to nudge fabric layers and as a stiletto when needed.

·         My most challenging quilt was a challenge because of the hand quilting: a Joseph’s Coat. 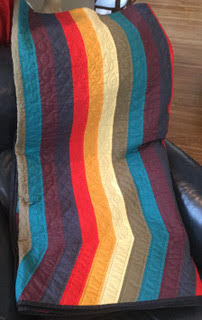 Joseph’s Coat: Here’s the quilt from whose scraps AMISH is spelled. It’s all hand quilted in black, the traditional Amish method. Along the purple strips I quilted a message among a traditional Amish quilting design. The first three strips read “Kathryn Jenson White” “Started 1998 Finished 2011” “Norman, Oklahoma.” For the next three I divided my own “text” with an allusion to the biblical story of Joseph in the Book of Genesis. I am not a religious person, but I wanted the connection of where the real name came from. The three strips read, “Book of Handwork Chapter 2 Verses 9-52 Now Kathryn Loved Joseph’s Coat More Than All Her Quilts.” My birthday is 2/9/52. Here’s the beginning of the text from Genesis 37 Chapter 37 Verses 3-35: Jacob loved Joseph more than he did any of his other sons, because Joseph was born after Jacob was very old. Jacob had given Joseph a fancy coat to show that he was his favorite son….” If I’d had room in the purple strips, I would have done the whole thing up to there: Now Kathryn Loved Joseph’s Coat more than she did any of her other quilts, because Joseph was made after Kathryn was very old. Kathryn had pieced Joseph a fancy coat to show that it was her favorite quilt.” I had to summarize for space.

·         My fabrics and scraps are organized (sort of) by color in Ikea bins in Ikea cubby shelves. 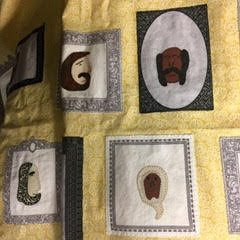 A Bewhiskered Collection: I found this weird font with letters and faces many years ago. I put the blanket stitched and embroidered faces and facial hair in frames that were a collection of what were meant to be quilt labels. Then I appliquéd them to wallpaper-looking fabric and put a fireplace and bookshelves below to create a wall room. My favorite part is a miniature silhouette of myself I “hung” over the fireplace. It was from Disneyland when I was 16. I photocopied it, reduced it to the right size and blanket stitched it. 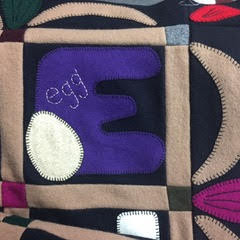 Woolybet: This was my first wool quilt. It’s a pattern I adapted. I often change some elements of patterns to better please me. I’m not a big lover of hearts on quilts, and the tassels were those. I redrew them to be tassels. I changed some blocks, too. I’m going to hand quilt this one with Perle Cotton in large-stitch quilting, I think. Maybe this winter. Maybe next.

Posted by Philly Modern Quilt Guild at 10:39 AM No comments: